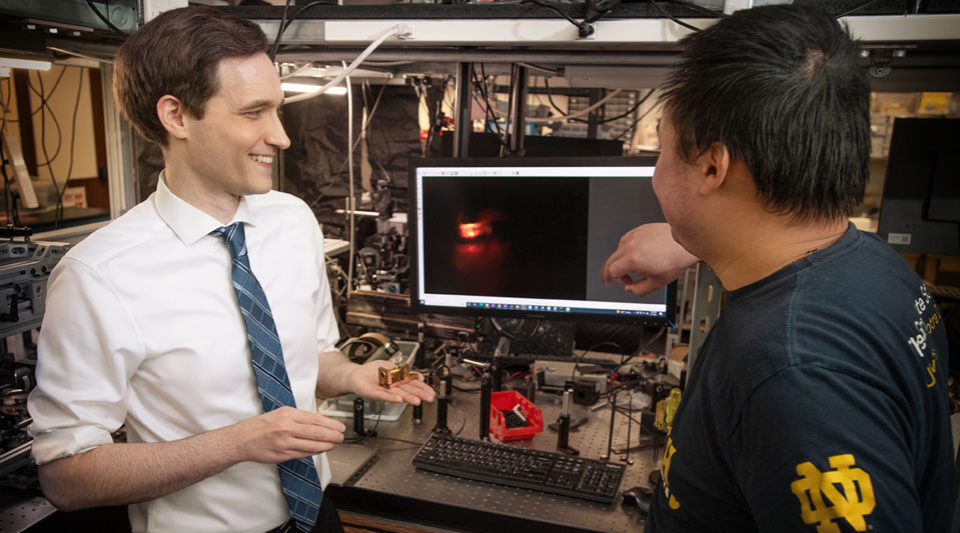 Harnessing the power of long wavelength light is key to the next generation of sensing and imaging devices for environmental monitoring, explosive detection, and biomedicine. Currently, however, the systems emitting such light are large and low-powered.

In a new study published in Nature Communications, electrical engineers at the University of Notre Dame have succeeded in storing long-wave infrared light in an optical resonator for a hundred times longer than had previously been demonstrated. This achievement will make possible the development of microchip-scale devices with new functionalities, particularly new broad-spectrum sources.

David Burghoff, assistant professor of electrical engineering, and postdoctoral researcher Dingding Ren, reached this milestone by making both the component parts of their new light source—the microresonator and the waveguide—out of germanium, the same material used to create the first transistor at Bell Labs in 1947.

“The resonator is to light what a wine glass is to sound,” said Burghoff. “When you run your finger along the rim of the wine glass, you get a tone—that’s a resonance effect. The glass vibrates at that one frequency, that one note. The optical resonator is like that, but for light, and the waveguide acts as a pipe that brings light to the resonator.”

The next step is to get the resonator to produce a comb, a type of laser that splits frequencies into thousands of perfectly spaced lines. Each frequency of the comb’s light, or tooth on the comb, causes different molecules to vibrate, says Burghoff. The way each molecule vibrates reveals its identity, or ‘fingerprint.’ These sources would be useful for detection modalities like dual comb spectroscopy or frequency comb ptychoscopy, a technique his lab recently demonstrated.

“One of the key challenges for spectroscopy is that you need very broadband radiation,” said Burghoff.  “A laser might work to detect, say, methane — because you need light at only one frequency or one line. But to detect multiple things at once, you need broadband sources.”

Burghoff will have the opportunity to advance his device as a 2022 Moore Inventor Fellow. The fellowship supports scientist-inventors who create new tools and technologies with a high potential to accelerate progress in scientific discovery, environmental conservation, and patient care.