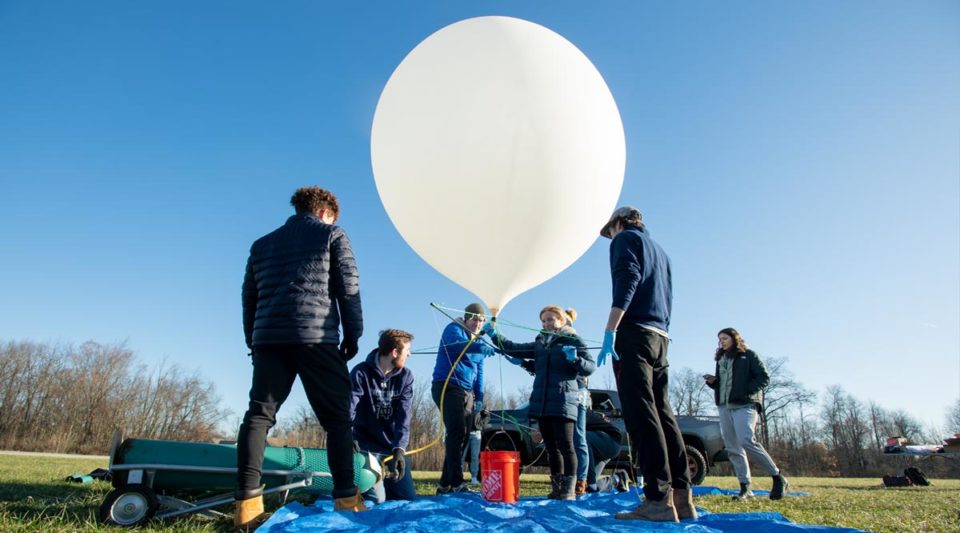 The club, which was established last year, will use launch data to apply for membership in NASA’s CubeSat Launch Initiative (CSLI). CSLI membership will permit future teams to launch cube-shaped, nanosatellites in space for research.

The mission for this year’s launch was to demonstrate the performance of nanoantenna in measuring infrared light as the balloon passes through the atmosphere, said Gary Bernstein, Frank M. Freimann Professor of Electrical Engineering, who worked with the team to develop its research objectives.

“The ultimate goal is to provide a new tool for gathering data on solar activities.”

The satellite’s payload — its computer, communication systems, and GPS transmitter — are tethered to a high-altitude, helium-filled balloon. Once released, the balloon and payload rise five to six meters per second through the gusty jet stream to the windless upper atmosphere.

IRIS reaches its peak altitude at around 100,000 ft. Expanding helium makes the balloon swell to five times its original diameter. The balloon then bursts, and a parachute brings the payload back to earth.

Locating and retrieving the payload requires math and teamwork. “We used an online program to find out where our payload and parachute would be landing,” said sophomore Ryan Hechmer.

“In the end, we used the drag equation to compute our descent velocity.”

Even before the balloon was released, three club members, senior Peter Harkins, junior Zach Zarzaur, and freshman Isaac Brej, set off in a chase vehicle to locate and retrieve the payload by tracking its GPS coordinates.

The club’s membership is growing rapidly. “Now the challenge is in getting an organization set up so that everyone can get involved and that there are cool things to do at all levels — first year through senior,” said IrishSat faculty advisor Scott Howard, associate professor of electrical engineering. “The students have taken leadership in that.”